We are fortunate to have Derek Charles Hutchinson as one of our regular "Guest Instructors" and proud to call him a close friend. Derek has earned the title of Professor Extraordinaire given his experience and credentials. Unfortunately, Derek has moved on to his next adventure when he died on October 10, 2012 at 4:12 pm. I was there at the end as I promised Derek. I was also privilged to give his eulogy just before he was cremated.

Since the time of Derek's passing I have received hundreds and hundreds of e-mails and postings on the USK facebook page from around the world tell me how much of an impact Derek made in the lives of paddlers. I also received numerous notices from people who have never met him, but still felt his influence in the books he had written. For those who have written and wanted to hear Derek giving his famous North Sea Talk it is available in Derek's very last video "The North Sea Crossing And Yarns From The Cockpit." It is a two disc set that is living history told by the master himself. 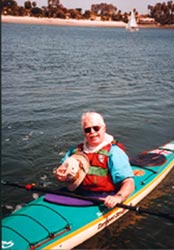 Derek Hutchinson is a Senior coach (BCU's highest award) for the British Canoe Union. He is qualified to teach sea kayaking and whitewater kayaking. Derek has designed 18 kayaks, paddles and numerous pieces of kayaking equipment. He wrote the first book on sea kayaking education and many others since then.

Among his many firsts, Derek is most known for his crossing of the North Sea in a single kayak (without any support vessels.) This 100 mile epic trip was the ultimate challenge of it's time given the distance covered without the ability to sleep along the way. As Derek says,"a kayaker in a single kayak is limited to the distance he or she can cover during his or hers waking hours."

Derek Hutchinson is considered by many to be the "Father of Modern Day Sea Kayaking."

As a true "Renaissance Man" Derek is a bundle of talents. He is very proud of his kayak designs, especially the Gulfstream, Sirocco and the Andromeda all manufactured by Current Design Kayaks.

If you didn't know, Derek is also an accomplished artist. He does the illustrations for his books and has an incredible collection of drawings and water colors done by his own hand. Derek has decided to release some of his drawings as "Limited Edition Prints." 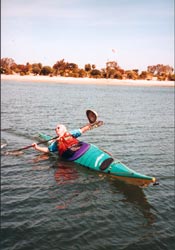 If you have never taken a class from Derek Hutchinson you are missing a real treat. In Derek's "Beyond the Cockpit" class he uses techniques that get you leaning and edging your kayak with you smiling and remaining upright.

Not only does the class get you feeling more comfortable leaning outside of your comfort zone you will learn techniques that will help you maneuver your kayak on those very windy days on rough water.

This one day class is chuck full of exercises to help you explore the relationship between you, your kayak, your paddle and the water. Not to worry, Derek firmly believes "Kayaking is a dry sport."

Contact us at USK if you would like to arrange a "Beyond the Cockpit" clinic for your club or group. Even though Derek is gone we have co-taught the clinic together for so many years I can teach the class in Derek's absence.

Whether you have ever met Derek or not I can safely say that he has influenced your kayaking in any number of ways. It could be your instructor was coached by Derek. Your equipment design has been influenced by Derek. One of your recovery techniques was first put to print by Derek or it can be the higher safety standards in place influenced by Derek over the years as a Senior Coach. As kayakers, we all owe him a big "Thank You!" for his many contributions to the sport of sea kayaking.