I hope this never happens to you, but there may come a time when you have a paddler in the water that is incapable of assisting you with respect to getting them back into their own kayak after a capsize. There can be any number of reasons why the paddler cannot assist. They could be extremely hypothermic, unconscious, injured or may be just plain exhausted. Regardless of the reason, you now have a victim on your hands as compared to having a person who can assist in their own recovery. This is a situation that I classify as a rescue and call the paddler in the water a victim.

There are a number of concerns, which should be high on your priority list. At this time I am not going to discuss what to do if the victim is not breathing. I will write this article with the assumption that the victim is breathing and has a pulse.

Assuming you are next to the victim, your first concern is to keep an unconscious victim face up. Then your next concern is to assess how quick you must react with respect to the victim’s immersion clothing.  If they are properly dressed you will have more time. Here is just another reason why you should dress for immersion and find paddling partners that also do the same.

I am going to review the scoop rescue from the perspective of one victim and one rescuer. If you have more than one rescuer to help get the victim back into their kayak, it makes the process easier. Extra hands also means other alternatives for getting the victim back into their kayak. However, I recommend practicing this rescue alone in the event of the worse case scenario. 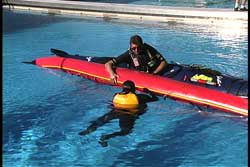 The set up is important for this rescue.  You need to have the victim next to the cockpit of their overturned kayak with the rescuer on the opposite side of the kayak. In this example, I am in the bow to stern position.  However, this can also be done in the bow to bow position. Try both ways to see what works best for you. Your kayak orientation can also be based upon what you plan to do after the victim is back in their upright kayak.

You may have to do some creative maneuvering to get into the starting position if the victim and their kayak are separated. A cowtail or a deck sling provides you with a way to get the kayak to the victim or visa versa. See USK article, "Using A Deck Sling." 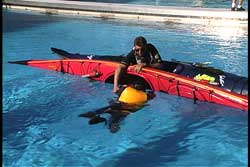 The basic concept of the scoop rescue is to flood the cockpit so you can float the victim into their cockpit and then right the kayak. Having a kayak with bulkheads and/or adequate float bags is essential for this rescue. You will be leaning over and resting yourself on the victims kayak. Turn the kayak on edge to allow water into the victim’s cockpit. 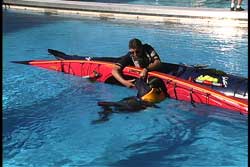 How much you can manipulate the victim is going to be situational. If the victim has suspected neck, back or skeletal injuries you have a difficult decision to make. Will your manipulation of the victim's body cause greater injury? If you don't manipulate them into the kayak, will they die of hypothermia? If they are left in the water will the water movement cause further injury? Neck, back and skeletal injuries are not common in regular sea kayaking. They are more common with those who surf and play in rock gardens. The victims that will typically need a scoop will most likely be hypothermic, unconscious, exhausted or have a dislocated shoulder (from a bad brace or bad roll). Body manipulation will be a concern for the victim with the dislocated shoulder, but you can work around that with good communication with the victim. In addition, you may have to isolate the dislocated joint to minimize movement, before doing the scoop rescue. In this example there are no injuries. I instructed the victim to go limp and allow me to do all of the work. This would be the best simulation for an unconscious victim. 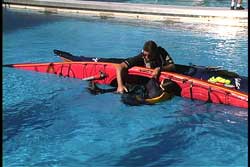 While holding the victim close to their cockpit, I reach over their boat to get them into a position where I can get the front of their body facing their cockpit. I reach down to the back of their knees so I can get their feet into position to put into the cockpit.

So you do not get confused by the way I am moving the victim, the final position of the victim will be face down to the back deck when their kayak is uptight. They will NOT be sitting in their seat facing forward. They will be lying in their cockpit with their belly facing their seat. 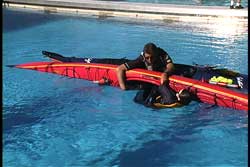 I pity the poor rescuer who would have to do this to me since I am 6'7" and have some meat on my bones. When I sit upright in a kayak my feet can touch all forward bulkheads, in all of the commercially produced sea kayaks on the market (assuming I can even get in the cockpit). I raise this point because the larger the victim the more challenges you will be facing. Therefore, I highly recommend that you practice this rescue in a group setting where each of you can work with different size victims. 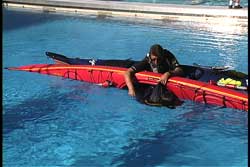 As I mentioned above, the larger the victim, the more you will have to work to right the kayak. As you will read in the "Hand of God Rescue", keeping the victim's center of gravity closer to their kayak makes it easier to roll it upright.

In this case, with a limp victim, you also need to hold the victim in position as you right the kayak. If you just roll the kayak upright, the limp victim's upper body will stay in the water. If they don't end up slipping out, you will be working much harder than necessary. In addition they could end up face down in the water. 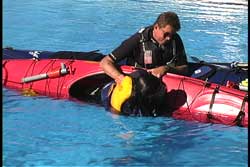 As you can see, I am holding the victim in place as I right the kayak. I have one hand pulling on their PFD and the other hand on their cockpit coaming. I am pulling the victim up as I roll the kayak up.

Once the kayak is at a certain point, I can no longer pull up on the cockpit coaming. I still keep my hand on the coaming, but change the direction of force being applied. While I continue to pull the victim's PFD towards me, I push their kayak slightly away from mine and push down on their coaming to continue the righting action.

This push pull technique works best if done smoothly so you can take advantage of the momentum you started when you began to pull up on the coaming. This technique is the same one I use in the "Hand of God Rescue". It takes some practice to get the kayak to roll up smoothly with a person in the cockpit. 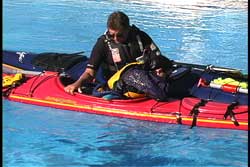 Before going into the factors you need to consider after the kayak is upright, I want to discuss why I chose to put the victim in their kayak where they ended up face down.

In this example, I mentioned I had a limp victim. This is how an unconscious paddler would be. My priority considerations in performing this rescue was keeping the victim's face out of the water, getting them out of the water and then having them in a position that would NOT cause them to aspirate on water or vomit (in their mouth) when they were back in their upright kayak. First aid protocol has victims on their side to prevent them from choking on their vomit. Given the constraints in a cockpit, I believe a face up or face down position are your only two viable alternatives. Also, a face down victim in a cockpit is usually more stable than one sitting up with their body in a position to slump to the side.

As I mentioned earlier, this rescue gets easier if their are more rescuers available. However, if you have more than one rescuer, then you need to designate a lead rescuer to coordinate the entire rescue. The group needs to be in agreement as to what actions to take, but not at the expense of keeping the victim floating in the water. With a number of rescuers, you can even have one of the rescuers in the water with the victim (assuming the rescuer is dressed for long immersion time). That rescuer in the water can help keep the victim face up and provide support and stabilization. They can also help guide the victim into the kayak and help roll the kayak upright. Of course, securing that rescuer's kayak on a tether is necessary so their kayak doesn't drift away.

If the victim is conscious and able to provide some assistance with their recovery, it will make it easier when it comes to manipulating the victim. If they were just exhausted, then they could help get their body into the kayak and you could try to roll them up in a seated position. If you decided to roll them up in the face down position, to keep their center of gravity lower, then you could have them roll their body upright after the kayak is righted. A conscious victim provides other opportunities.

The original positioning of the kayaks can be a factor in what you plan to do after the kayak is righted. Your first consideration is to get the victim in their kayak and the kayak righted. If you can only accomplish this rescue in one specific boat orientation, then you will have to use that position. If you can learn to be efficient at performing the rescue regardless of the boat orientation, then you should consider what final orientation you need once the victim's kayak is righted. If you had to wait for the help you called, what boat orientation would be best for you to stabilize the victim's kayak and still help and monitor the victim?

The purpose of this article is how to do a scoop rescue. What to do after the victim is upright in their kayak depends on the situation in which you find yourself. There are endless "What if?" scenarios that can be created for the next phase of the rescue. What do you do once the victim is back in their upright kayak? I will not try to answer that question in this article. I will share my thought process with respect to some considerations. Again, I am assuming a breathing victim with a pulse.

I need to address the needs of the victim: body temperature, victim's stable position in kayak, stabilizing their kayak, nutrition, signaling for outside help, towing possibilities to get them ashore upright. These considerations are also factored into the environmental conditions present at the time and our location to outside help. I also need to consider my needs and abilities into this equation.

I started this article by saying, "I hope this never happens to you", because the scoop rescue and the implications of having to perform one can be very challenging. I find training for this rescue very rewarding with respect to skill development, coordination and communication. I suggest you first practice it one on one. Then try it two on one. Then, three on one. Also try it with one rescuer in the water. Then I suggest you take the next step after the victim is upright, which is setting up for the tow and then towing to see if your system works. I will add, that the use of "Sea Wings" can give the one on one or the group more options for towing. See USK article "Sea Wings Recoveries And Uses."